What it takes to go to the San Diego Comic-Con

Why we got there

Ana and I had already discussed our dream of going to the San Diego Comic-Con one day. Being up close with all those people we admire, listening to the panels, making it to Nerd HQ, being the first to watch the latest trailers, and really just diving right into nerd paradise and sharing the experience with people who felt the same way. After my first big adventure in Europe, I went back home for a couple of months to bounce right back into a Master’s in Scotland. The Comic-Con conversation stirred up again at some point during that year and one day I simply stated: “We’re going to Comic-Con in 2015”. SDCC 2014 was not possible because I had a dissertation to deliver in August (never mind no way to save up the money), but why not the following year? Ana stared at me as if saying “Keep dreaming, dude” in a look I’ve grown used to getting. But I knew better. I came home mid-2014, broke and with no job or prospects, but that didn’t deter my determination (“Comic-Con determination level” is now one of our go-to phrases). I quickly bounced back and worked my ass off as an English teacher full-time and doing translations on the side, which were the ones that really brought home the bacon.

Despite her skepticism, the first email I can find from Ana on this topic dates back to June 2014, before I got back home, and she actually signed up for the SDCC site even before that, back in February. Granted, we didn’t buy our tickets until the following March, but when I set a goal, let’s just say I make things happen, and usually manage to drag Ana with me.

How we planned our whole trip around it

So, we had our main destination, but we couldn’t just leave it at that, could we? When in Rome… So we planned a five-week tour of the US, and San Diego would actually be the last leg of our journey. We set off on June 11th and made our return on July 14th. We went to New York, Boston, Washington, Delaware, Chicago, Las Vegas, San Francisco, Los Angeles, and San Diego. And I even sneaked in visits to Iowa City and Salt Lake to visit friends.

How we actually got in

We already knew getting tickets to Comic-Con was going to be tricky so we started looking for alternatives. Both of us had volunteered for the International Film Festival of Uruguay and the Dublin International Film Festival by that time (in the following years, Ana would go on touring film festivals around the globe) and we quite enjoyed it. It was a no brainer. We registered on the SDCC website and got member IDs so we could get all the email notifications as soon as SDCC 2014 wrapped up. Then, the following February, we signed up to the Volunteer Interest List and then waited for the date the spots went out to be announced. Just like with the tickets, you have to sign in that day and just hope for the best (spots, of course, are limited and are given on a first-come, first-served basis, with returning volunteers already guaranteed priority access). So, of course, the day of, we were really nervous and ended up really surprised at how easily and quickly we got in and signed up. The previous year, spots filled up in 3 minutes and in 2015 it took a shocking 17 minutes. Ana says sometimes we’re lucky, I say my premonition skills are top-notch. We had our way in, easy peasy. We decided not to bother with the actual tickets and save ourselves the money and the stress. Granted, volunteering meant we would probably miss out on some things, but shifts were only three hours long and it was still all-round worth it.

We might not be able to write a book about the experience but I’m pretty sure a series of articles would be more than feasible. So, today, I’ll just stick to some highlights.

Anywhere near any event at any given time.

1. Waiting in line: Yes, there were extremely long lines. Yes, we did miss out on events to wait in line. We even did an overnight one. And yes, they were very much worth it. Every second of it, because of...

2. The panels: The main events are in Hall H, which was our hotspot for most of the convention. It has a capacity for 6500 people just to give you an idea.

I got to hear Joss Whedon speak (our overnight incursion). And Nathan Fillion and Alan Tudyk promoting Con Man. Had a 360º trailer experience with some of the hottest trailers of the time: the premiere of Supergirl, Heroes Reborn and Blindspot, as well as the trailers for Suicide Squad and Batman vs. Superman. They might seem like specks now, but at the time, they were BIG. And it’s not really about how good the show or film may actually be, it’s about being there and seeing all the stars in the flesh, as well as the stories they tell. You become part of an inside joke you wouldn’t be privy to otherwise.

There was also Doctor Who and Peter Capaldi. We got to hear James McAvoy and Daniel Radcliffe’s dreamy accents while promoting Frankenstein. And Matt Smith promoting Pride and Prejudice and Zombies. Tom Hiddleston, Guillermo del Toro, Henry Cavill, Armie Hammer, Hugh Jackman. Need I say more? It was heaven.

And then there was how the whole of Hall H sang Stand by Me to Wil Wheaton finishing up with a surprise marriage proposal he cried to. I can’t even begin to describe it. How thousands of strangers just came together and started singing (in something other than a concert) and got to be part of what is usually a very private moment. 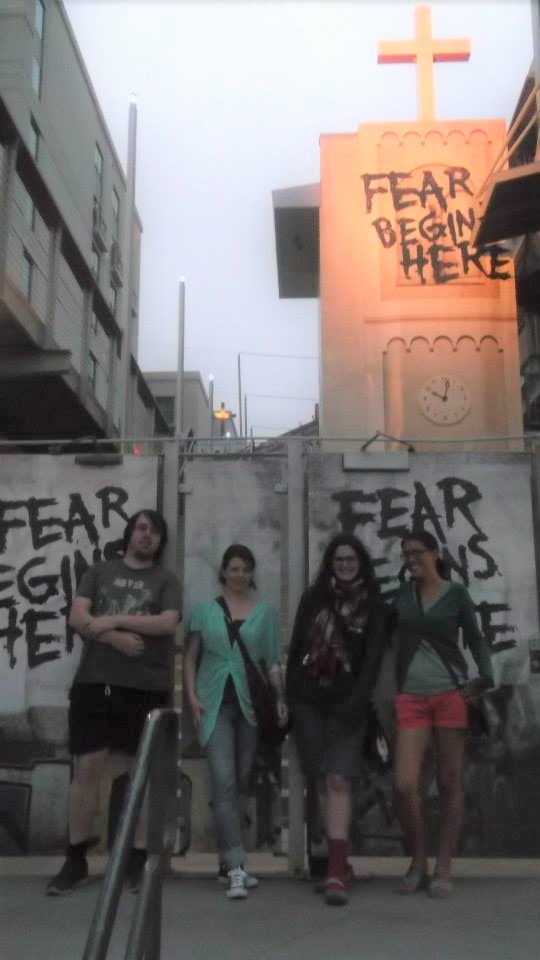 3. Extras: There were pop-ups all around the convention center. A Batmobile, the Ghostbusters car, Scream Queen ice-creams, The Walking Dead experience, and many others. At the convention center, we had the stands selling all kinds of amazing products and regularly giving things away. We missed most of them, but have a full stack of posters. If those are the things that rock your boat, we advise you to follow Twitter and any blog that regularly updates on it, though we also advise you to come to terms with missing out on some things. You can’t be in 20 places at once. Sigh.

Sadly, we couldn’t get tickets to the autograph booth and tickets for Nerd HQ’s events sold out rather quickly so we weren’t able to make it to any of those either. We were on a bus journey while tickets went out and the internet connection left much to be desired. We did show up at the wrap party for a bit, but at the time there was not much going on and we ended up bailing early. Don’t judge us, we couldn’t have imagined the level of exhaustion the whole ordeal meant.

However, we were in fact very lucky to get into a taping of Conan. We are known for not minding waking up extra early for awesome perks and we always seem to get our way. The theater was gorgeous and it was an incredibly fun experience, both when we were rolling and when we were just chilling. The guests included stars from Game of Thrones and The Walking Dead and we got to go home with an exclusive Conan Funko Pop. As for Conan himself, in addition to being ginger, he is amazing both on an off-camera; he even came out to say hi and signed our Funkos.

You might be able to slightly make out the awesomeness of the t-shirts in his terribly blurry picture.

4. Volunteering experience: We did miss out on the X-Men panel because of a shift, but other than that, it was incredible. We met lots of great people, were busy doing useful things and got a kick-ass t-shirt out of it as well. There is something incredibly rewarding about volunteering and it just makes the whole experience all the more memorable. I mean, where else would you be offered a slice of pizza by people waiting in the line you are checking or get to work alongside Spider-Man?

5. Lodging: Remember how I mentioned we volunteered at the Dublin Film Festival? Well, there we met the amazing Caroline, Allan and Lisa and, as luck would have it, they were also going to Comic-Con that year. So we decided to rent out a house from Airbnb together. The house was amazing and the owners were sweethearts. They were so accommodating they drove us around a couple of times and also gave us their free tickets for the San Diego Zoo. The only downside: the hill it was on proved really challenging when coming back to the house late at night after being out and about all day.

If you feel like you don’t have a reason to travel, find it. If you can't find a good enough reason to leave your comfort zone and hit the road, dig a little deeper. Ask yourself, when will it really be the best time to do it? What’s stopping you? Have you found your ideal travel partner? Couldn’t you just still go at it alone? Would you ever consider volunteering? Do that thing you always wanted to do. Set a goal and you’ll realize is not as impossible as it may seem. I was completely broke, but, at the risk of sounding even more cliché, dreaming doesn’t cost money. I found someone as mad as me to tag along and, the thing is, when you make up your mind, things just start falling into place.

If you’d like to know more about the volunteer experience, Comic-Con or the rest of our US tour, drop us a line!

Careful What You Wish For

Tips to plan your next trip - Take 1

Sundance Film Festival - The Five Ws and One H